The most Famous Christmas Tree in Britain

The 61st Norwegian Christmas tree in on its way to Trafalgar Square. 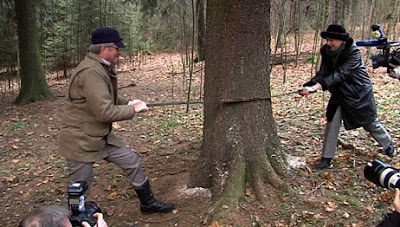 Mayor of Oslo, Fabian Stang and Lord Mayor of Westminster, Carolyn Keen
In London, near the statue of Lord Nelson in Trafalgar Square, a giant Christmas tree is set up and decorated with great ceremony each year. The tree is a thank you gift from the people of Oslo, Norway. During the Second World War, King Haakon of Norway was forced into exile in England when the Germans occupied his country. Since 1947, Norway has expressed its thanks for the help of the British people by continuing to send a huge Norwegian spruce to be shared by all.

Marius Borg Høiby, HRH Princess Ingrid Alexandra and HRH Crown Princess Mette-Marit switch on the lights on the Norwegian Christmas tree in Trafalgar Square last year.
The Christmas tree became popular in England in 1841 when Queen Victoria's husband, Prince Albert, brought a Christmas tree over from Germany and put it in Windsor Castle. The Royal couple were illustrated in a newspaper standing around the Christmas tree with their children, and the tradition of decorating a tree became fashionable.