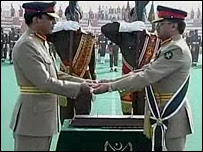 Gen Musharraf said the army was the saviour of Pakistan

Pakistan's President Pervez Musharraf has handed over the command of the military in a ceremony in Rawalpindi.

In his farewell address, Gen Musharraf said the army was his "life" and he was proud to have been the commander of this "great force".

He had been under huge pressure to quit as army chief and is due to be sworn in as civilian president on Thursday.