Hispanics set to be key 2008 voters 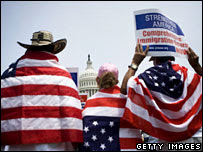 Republican presidential candidates are set to gather in Miami on 9 December for a debate sponsored by Univision, the biggest Spanish-language television network in the United States.

The BBC's Lourdes Heredia looks at what the two rival US parties are doing to capture what could prove an all-important Latino swing vote.

"Bienvenidos amigos!" (Welcome friends), "Si se puede" (We can do it).
A failed immigration reform bill stirred up feelings earlier this year
Not so long ago, the majority of politicians tried to speak a few words in Spanish as a way to demonstrate their interest in the Latino community.

HISPANIC VOTERS
15% of US population
9% of 2008 electorate
6.5% likely to actually vote
57% of voters support or lean to Democrats
23% aligned with Republicans
Sizeable share of electorate in states set to be closely contested - New Mexico, Florida, Nevada, Colorado